We all know that food sustains life—that’s why we never forget to bring rations with us when we venture out into the wild. But there’s a limit to how much foodstuff we can carry; a hiker or backpacker would not go over the rule of thumb of packing 2.5 pounds of food for each day that they spend outdoors—that’s already counting in the extras.

Should the worst happen and you get stranded in the wild, that amount of food will last you for two, perhaps three more days than what you originally planned for. So what happens if help takes longer than that to arrive? You’ll need to know how to find food in the wild. 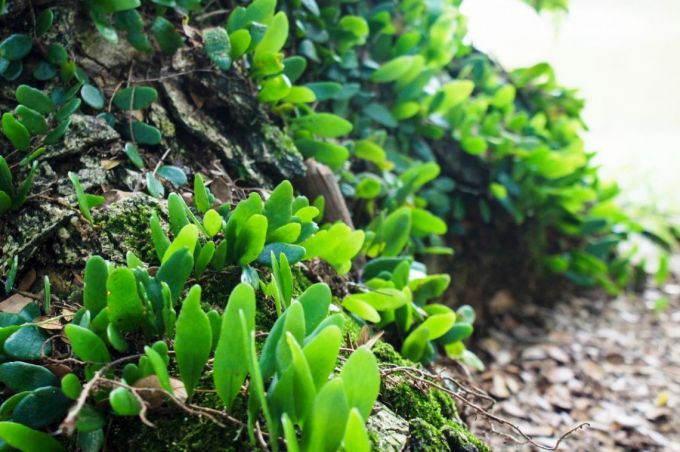 All food comes from nature, and out there, we’re surrounded by nature, so logically it shouldn’t be difficult to survive. The problem is, not everything we find in the wilderness is edible—and even if you happen to find something you’re sure is edible (such as fish), there’s the problem of figuring out how to harvest and prepare it.

Therefore, the key to survival is to be able to tell which plants or insects (yes, insects) are poisonous and which are not, learn how to set traps or use simple tools to catch wild animals to eat, and being able to prep or cook the stuff properly to avoid getting sick afterward. 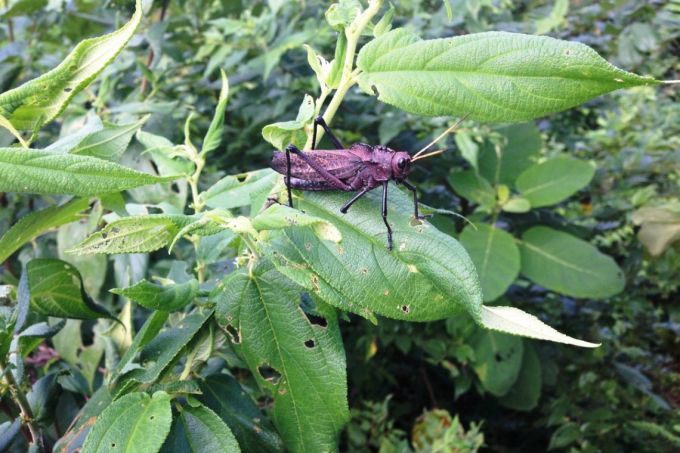 In this article, you’ll find a comprehensive guide on how to forage for food in the wild to keep yourself alive until help arrives. We have categorized this article into three sections. In each section, you’ll find a step-by-step guide detailing how to identify, harvest, and prep three different types of food sources (plants, wild animals, and insects). After you’re done with this article, you’ll have the capacity and confidence to survive even the harshest of environments.

Carrots, lettuce, cucumber, onions, and a healthy helping of fresh, colorful bell pepper. That’s what our favorite salad is usually made from. Unfortunately, those are all farm-grown vegetables, so it’s unlikely that you’ll find them growing wild. To survive in the great wilderness, you’ll have to expand your palate and harvest wild plants, such as:

Asparagus is one of the easiest wild plants to recognize due to its distinct shape and strong, urine-like smell. Take note that the ones you’ll find in the wild have a much thinner stalk than what you usually see at the local stores, though. 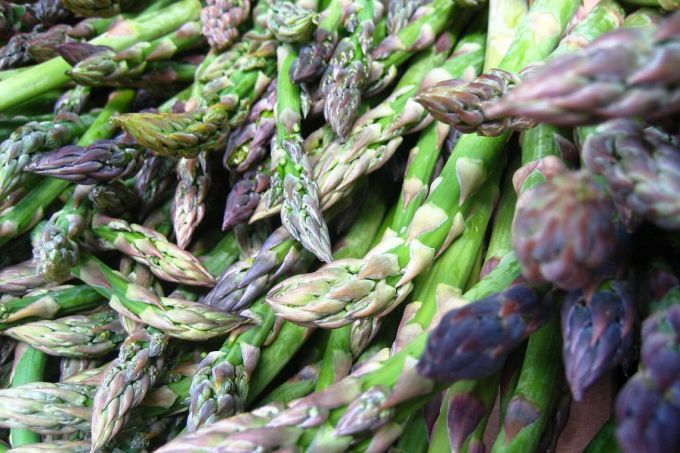 Nonetheless, wild asparagus is just as nutritious—if not more so—than store-bought ones. Rich in vitamin B6, potassium, thiamine, and vitamin C, asparagus will tide you over and keep you fresh and alert to better face any challenges that lie ahead. It’s also a great source of water, so it’ll keep you hydrated if water is an issue where you are. Here’s how you harvest and prep it:

Clovers are the symbol of luck—not just the four-leafed ones, but the ordinary ones as well since if you happen to spot them, it means you won’t have to go hungry. It’s a great source of protein. 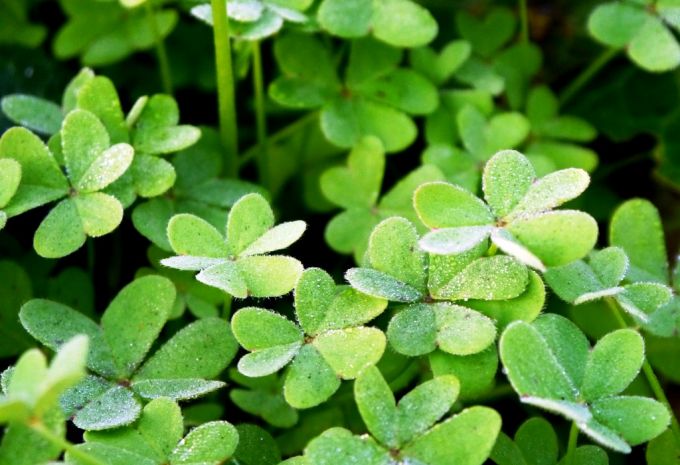 Eat some so you’ll have the energy to face the trials ahead.

Due to their distinct appearance, dandelions are easy to spot and thus make for a great food source in the wild. It helps that dandelion is a type of weed—and like all weeds, they are the master of fast reproduction. 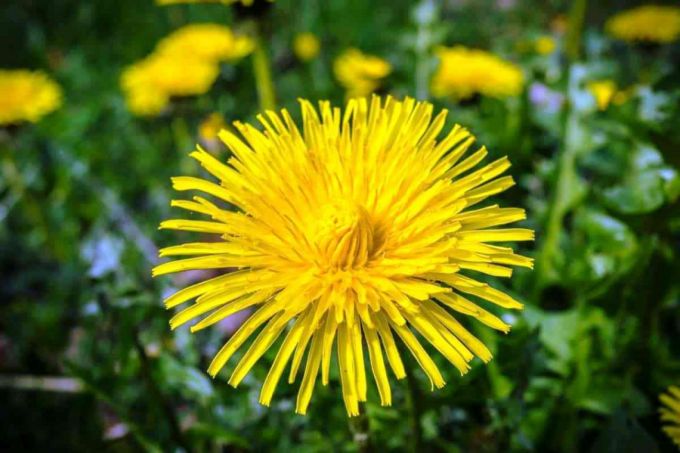 Where you find one, you’ll typically find plenty more.

Meet your new survival best friend: the cattails. These brown, cigar-shaped plants are as easy to recognize as they come, and they are pretty common, especially if you happen to find yourself somewhere around wet marshlands.

The cattails are an awesome, all-purpose plant. If you’re skilled at handcrafting, you could make sturdy baskets, mats, or ropes out of them. Most importantly, those brown heads catch fire really easily, especially if you help them along by first dipping them in oil or fuel. 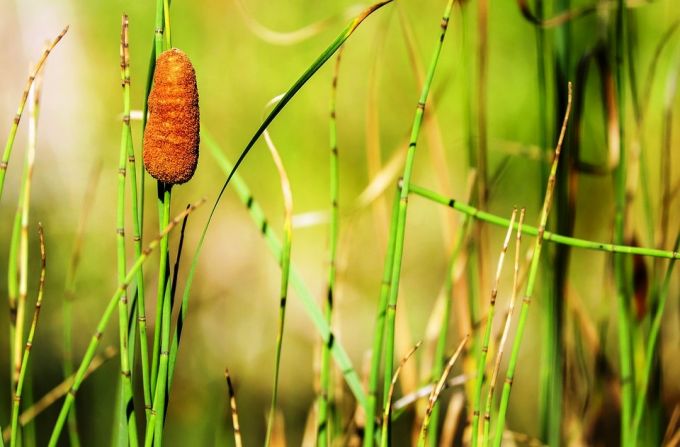 You can use them as makeshift torches or to make a fire pit. Once you’ve gotten the flame going, it’s time to get cooking.

If you live in an area that’s infested with burdocks, you’ve probably thought about weeding them all out once or twice because they can be pretty annoying. Their sharp, prickly hairs get caught in your clothes really easily, and they can make you feel itchy. But if you find some burdocks while you’re lost in the wild, far from being annoyed, you should count yourself lucky. 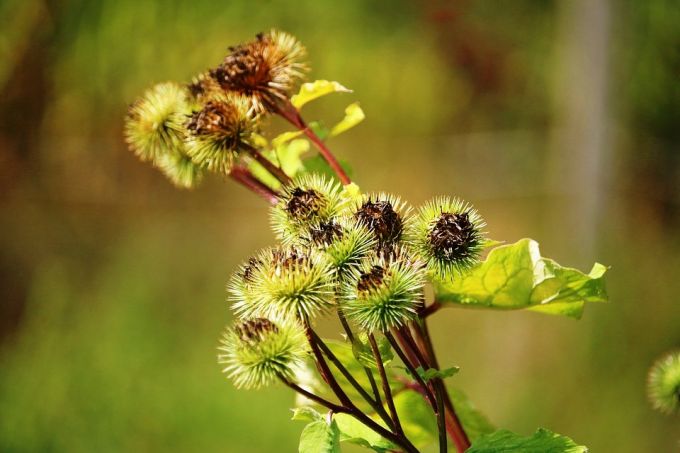 Burdocks are rich in fatty acids, tannins, essential oils, antioxidants, and carbohydrates. They also have antibacterial and anti-inflammatory properties, so whether it’s to fill up your stomach, to dress injuries with to prevent infections, or to use as a lotion to keep the insects away, you’ll end up recognizing burdocks as the lifesaver that they are.

We’ve covered the best sources of protein, carbohydrates, and vitamins in the sections above. Now, what about minerals? You got it; that part is best left to the amaranths. Rich in iron, magnesium, and containing three times as much calcium as the super-vegetable spinach, amaranth is an honest-to-goodness gift from God. 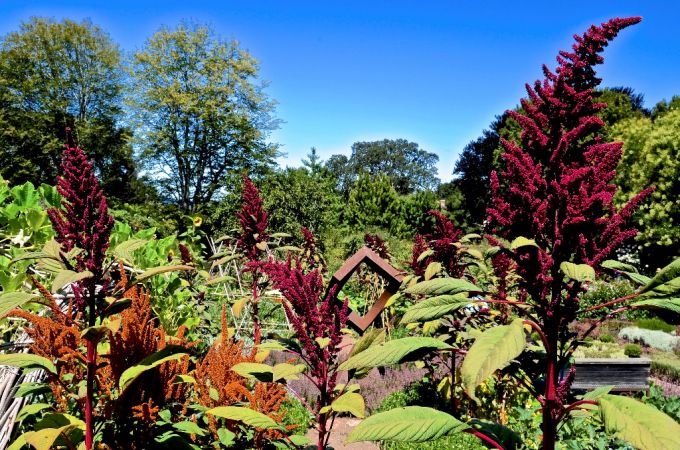 Although, amaranths can also be a double-edged sword. While not directly poisonous, if not properly prepared you’ll be ingesting a dangerous amount of nitrate—a substance which would cause cancer in the long run.

Your choices of edible leafy greens in the wild are not limited to the six options listed above. We only included plants that are commonly-known, and everyone should be able to recognize—if not by appearance then by name at least. If you’re well-versed in the kingdom of Plantae, then you’ll perhaps recognize some other dinner options such as the wood sorrel, white mustard, purslane, and the Opuntia cactus. 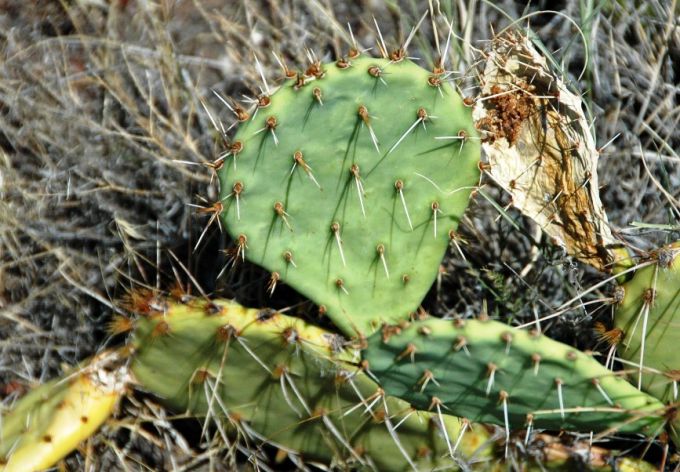 Catching Fish and Other Wild Animals

We have separated this section into two different categories—fish-angling and game-trapping. No matter which one of them you think will be more of use to you in the long run, we recommend that you go through the both of them. Better safe than sorry.

If you’re stranded near the river or on a deserted island in the ocean, then as long as you know how to fish, you won’t have to worry about going hungry. But be warned that that by “fishing,” we mean survival fishing. 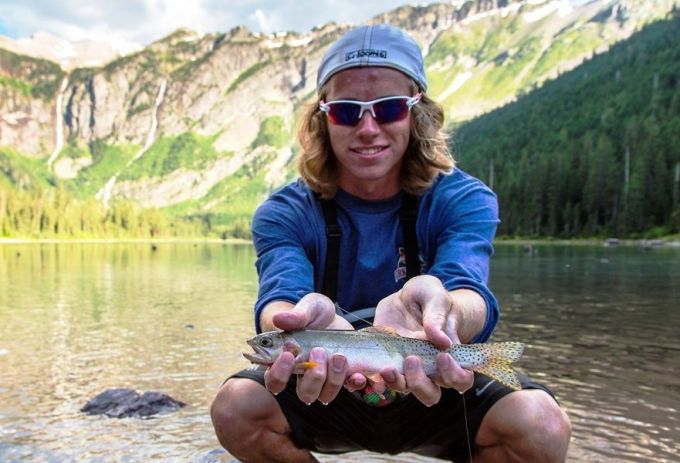 Skinning land-based game such as rabbits and deer is definitely harder and gorier than filleting fish, but if fishing is a no-go for you for some reason, you will want to have an alternative at hand. If you’re skilled and you’ve got a weapon (such as a gun or perhaps even a bow and an arrow) with you, it’s just a matter of sniffing out the prey. 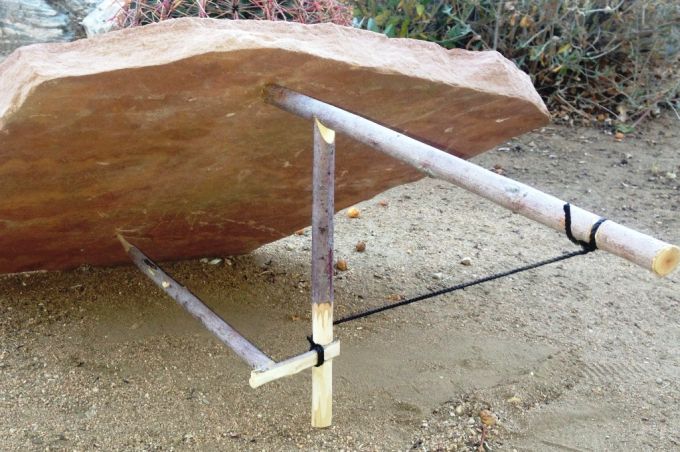 If the direct route is impossible, however, don’t worry because you can still set up some simple traps:

These two are the most basic of primitive traps. There are plenty more—although they require more time and skill to set up. You can experiment and practice at home if you’re interested in learning more—just make sure no one will fall into your trap and get hurt.

If worse comes to worst and you have neither edible plants, fish, nor land-based game to survive on, as a last resort, you need to hunt down edible insects. Yes, they are gross, but they are also an amazing source of protein and omega 3. That little crunchy body packs a punch and plays a pivotal role in your continued survival. Just think of them as potato chips. 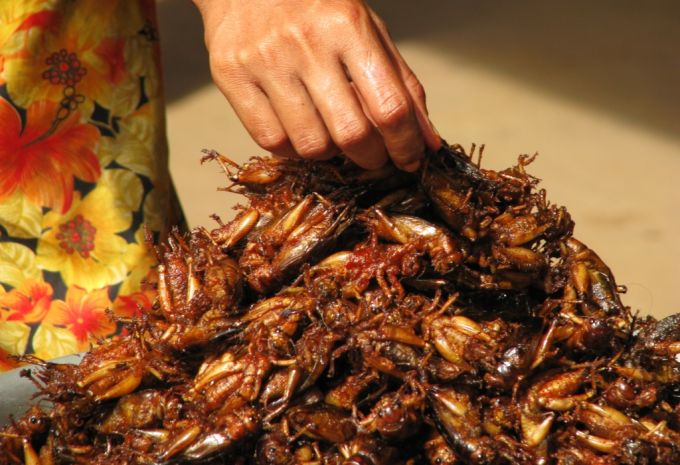 Although, not all bugs are safe to eat. Some of them are poisonous. Those you can safely consume without suffering any side effects (other than the possible urge to gag) include:

Although beetles are usually found solo, they are the giants of the insect kingdom, so they won’t be hard to spot. They can usually be found hanging around damp or rotting wood. Don’t eat them raw; cook them first by roasting over a fire. Then you can stuff them into your mouth right away or crush them to use as seasoning.

Scared you’re going to get stung all over while trying to capture these little things? Don’t be. Capturing them is an easy task if you manage to find yourself an anthill. Poke at it with a stick. In a bid to protect their home and queen, the ants will swarm the stick. At that moment, dunk the cavalry in a container of water. 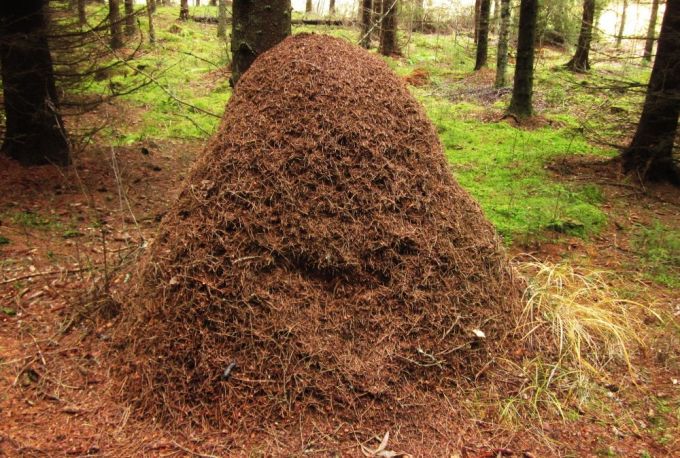 Boil them all for about 5 to 10 minutes; don’t eat them raw because their body is acidic in nature.

Maggots are perhaps the easiest type of bug to find out in the wild. Anywhere there is a dead body, you can count on finding maggots nearby. They can be eaten raw, but they taste better (arguably) if you cook them first.

Crickets can be eaten raw, but as with all insects, they taste better cooked. Since they move fast, chances are you won’t be able to catch them by hand. Set up a simple trap for them. Bury a tall container (such as a water bottle with the top cut off to make for a bigger entry point), then place bits of fruit or a glowstick inside to lure them in. They shouldn’t be able to jump back out.

You might be wondering: why would you want to actively seek out these parasites and willingly eat them? That’s because they are a great source of protein. 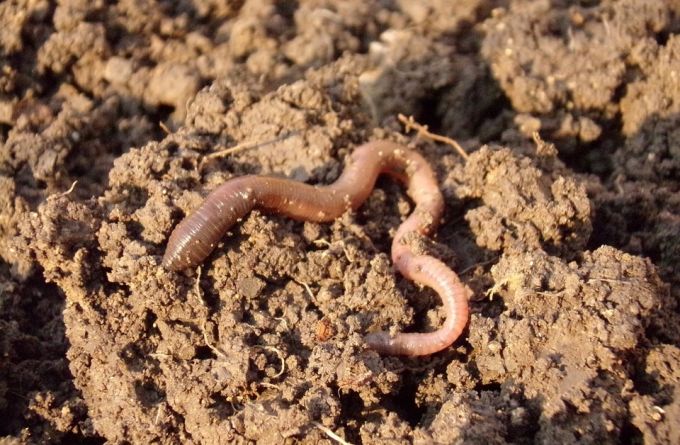 If you prefer the chewy texture over the crunchy texture, earthworms are a great alternative. Make sure to boil them first because if you swallow them alive, you run the risk of becoming their food source instead of the other way around.

Nature is beautiful, and that’s why we can never get enough of it. While we venture outdoors to appreciate nature’s splendor, don’t forget that the great wilderness can also be dangerous and unforgiving. Although, when one door closes, another opens. Now you’ve learned how to survive on natural food sources in the wilderness. All you have to do is stay strong and wait for help to arrive.

When in doubt or when stuck between a rock and a hard place, just remember one thing: the prettier and the more colorful it is, the further you need to get away from it. Colorful things—be it animals or plants—are usually poisonous.

Have you ever been stranded in the wild? What did you do to make sure you live to see another sunrise? If you’ve got any opinions, suggestions, or related story, please share them with us in the comments section below.