Camping. The very word seems to conjure fond memories—singing to the thrum of a guitar, exploring the woods, and of course, the delicious, steaming hot campfire food. But reality turns out to be different from what you’ve imagined. You arrive there later than expected, and the dark sky speaks of a long stretch of heavy rain.

How would you feel when the long-anticipated food turns out to be some instant gruel that’s little more than mush + sodium? Disappointed? Crestfallen? You can avoid all that by brushing up on some simple camp stove recipes.

Building a campfire might be too ambitious on the first day of camping when you’ve just arrived at the campground and there’s so much to do, but you can still cook on a camp stove. A camp stove is a luxury that most backpackers can’t afford because it’s too heavy—but not too heavy when you ride a car most of the way and only need to hike that last stretch on foot.

Camp stove cooking is often brushed aside in favor of the more exciting campfire cooking. This is a shame because there’s so much potential yet to be discovered. Your camp stove is useful for more than just boiling water. With some fresh ingredients, a little bit of flavoring, and no more than an hour of your time, you can whip up a mouthwatering pot for the entire group that will make them thank you profusely for rescuing them from instant gruel hell.

We’ve broken down this article into three categories—each detailing recipes for campsite breakfast, lunch, and dinner. All of the recipes you’ll find below can be made using simple cooking equipment such as a frying pan or a pot, and they should all be cooked over the flames of a camp stove. There’s enough to keep a group of campers full and sated over the course of a 2-day camping trip.

In the example above, we explained how a camp stove would come in handy when you’ve arrived late and the weather doesn’t seem to want to cooperate. If that situation describes your current dilemma accurately, then you might want to skip this part and head straight on to the camp stove lunch or dinner ideas. 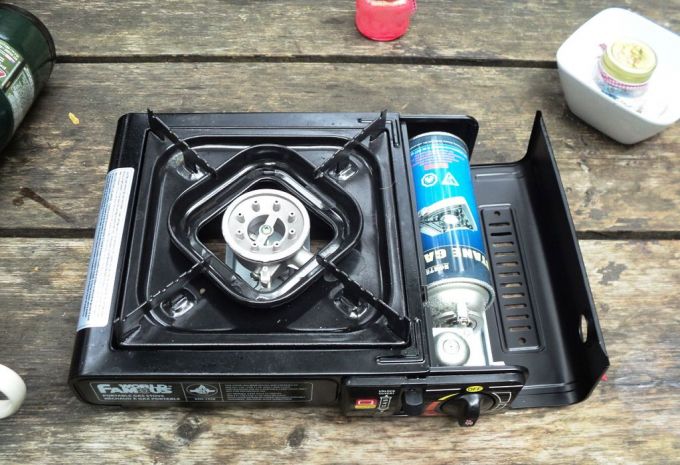 Once you’ve tested out our other recipes and found them so agreeable that you can’t stop cooking with your camp stove even when you’ve finished building a campfire, perhaps you’ll find it within you to check out these quick and delish breakfast ideas.

Here, we’ve devised a few recipes whose tongue-wagging smell should be enough to act as a wakeup call for the entire campground:

English breakfast is world famous, and it consists of an omelet, some crispy bacon, and the plate is usually garnished with cheerful colors coming from parley and tomatoes. Is it possible to recreate the timeless classic when you’re so far away from civilization? With nothing but a camp stove and a frying pan at your disposal?

It’s totally possible. By all-in-one, we’re saying that we’re going to combine all of the above-mentioned elements and cook them together in one pan. Here’s how you do it:

This recipe also works well to make other scrambled eggs recipes. You can replace the ingredients with onions and potatoes if you want.

You can never go wrong with pancakes. This light and fluffy comforting delight will make you feel right at home even when you’re surrounded by the great nature. We did mention that most of the time you may not be able to cook using butter or oil while camping, but that’s actually a requirement with this one. Even if you’re using a non-stick pan, pancakes just don’t taste the same without butter.

Yeah, sorry for being contradictory. If it’s any consolation, you don’t actually have to bring a huge can of butter all the way from your pantry to the campsite. You can prepare the batter at home. 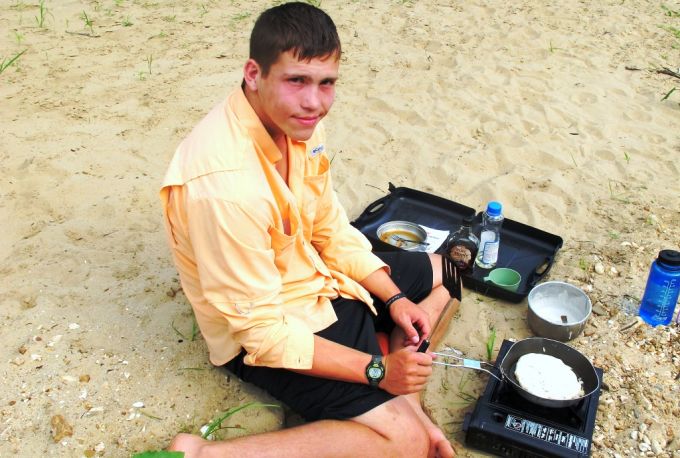 So, you probably already know how to make a pancake batter. Even if you don’t, all you have to do is follow the instructions written on the packaging of your choice brand of instant pancake. Therefore, we’ll make this brief and focus on how to actually bake the batter using the limited tools you have and garnish it to make it look good.

Lunch is often the most important meal of the day when you’re out there hiking. You need the boost of energy to keep you going till dinner, and since there are so many exciting activities to take part in, you better hope it’s a damn good boost. 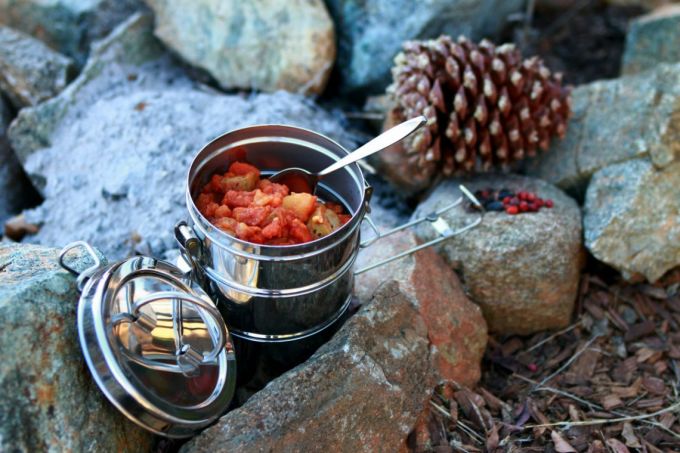 The top of the mountain is a cool place to be, but depending on what mountain and season it is, the afternoon can get quite sweltering. Therefore, you need something that’s not just loaded with proteins, but will also keep you fresh and energized to fight off the heat.

This recipe takes a bit more time and effort to cook. Although you can reduce the number of ingredients as you need, the basic recipe calls for quite a few varieties of vegetables. Still, in the end, all your effort will be worth it because this is one hell of a refreshing recipe. 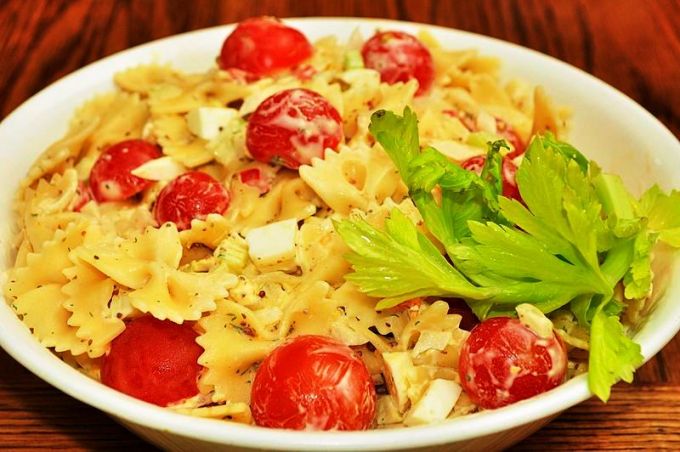 It produces quite a few servings in one go, too.

The crisp mountain air does things to the best of us. It never fails to make us hungry—especially for something unique and different that’s far removed from the banalities of our everyday life. 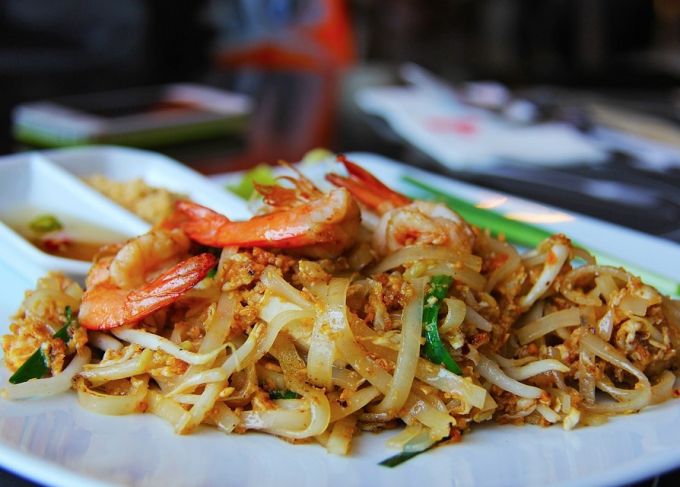 Craving something sweet and spicy? Then how about a plate of Pad Thai? Not only is it simple to make, but it’s also very delicious and refreshing. You may be sitting on top of a mountain, far away from the dazzling beaches of Thailand, but just for the duration of this lunch, you can spice up your vacation with a taste of the exotic.

It’s time for some dinner. If it’s only the first day of your camping trip, then you’re probably tired—having just finished building a tent and digging up a trench. You would be in the mood for something easy to cook, but still warm and tasty. If that’s the case, we’ve got the perfect recipe for you right here:

No better meal to soothe your tired body and soul with. You can make a whole lot of chicken soup in one go, and there aren’t that many steps you need to follow through. In fact, there’s just three of them. First, chop everything up nicely. Second, throw them all into the pot. Third, let it simmer. It doesn’t get any easier than this.

Here, we will list the basic ingredients needed to cook nutritionally-balanced chicken soup, but you can swap the ingredients or remove them as needed, depending on how much space you can spare:

As mentioned above, simply combine all of the ingredients in one large pot, bring them to a boil, then lower the heat and let simmer to get all the ingredients cooked through. You can add other veggies such as white cabbage or parsley if you want—just remember that parsley shouldn’t be cooked for too long, so stir that in last. 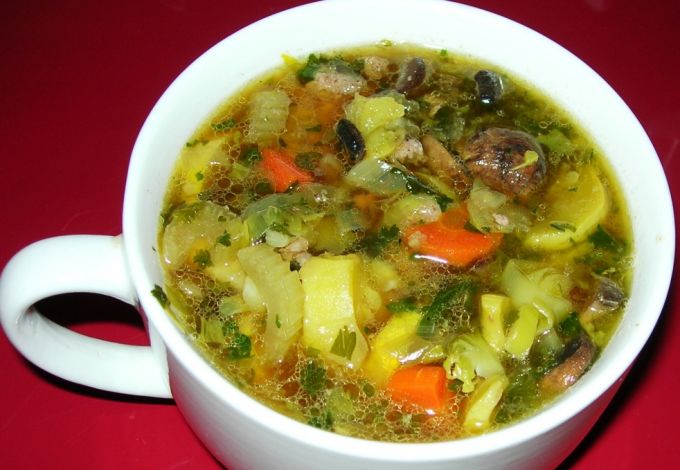 If bringing all of those ingredients and prepping them separately seem like too much of a hassle, replace all of the vegetables with one bag of mixed frozen veggies. That will take care of everything in one go.

If it’s your second day of camping, you’ve probably gathered enough fuel to build a campfire. You’re looking forward to satisfying your sweet tooth with some grilled marshmallows and s’mores, but for now, dinner calls for something savory.

Compared to the first day when all you wanted was something easy to cook, on the second day, the sweet mountain air’s renowned rejuvenating effect has finally set in. You’re ready to tackle something more challenging. A dinner fit for a king will be fitting especially if you’re feeling victorious, having spent the better part of the day conquering the top of the mountain. What better way to celebrate than by cooking a nice, juicy slab of meat? 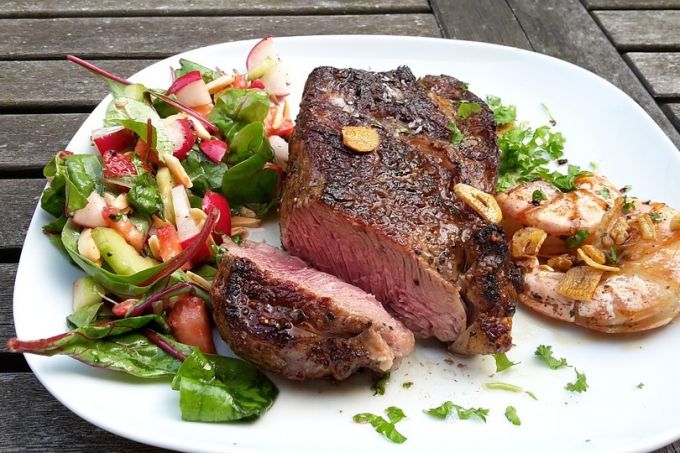 Our hunter-gatherer ancestors used to eat grilled meat all the time. Of course, you shouldn’t try to hunt down wild animals the way they did—simply purchasing good-quality meat from the butcher’s takes less time and won’t get you flagged down by the rangers. Still, the point stands. No better way to get connected with nature and our roots than by eating a rare piece of steak while surrounded by the great outdoors.

With this, you won’t have to settle for those low-nutrition, high-sodium instant food anymore. It’s not like instant gruel doesn’t have its own fair share of uses—it does, especially when you’re backpacking and every single ounce counts—but one of the many charms of camping is eating good food in front of a campfire while being surrounded by the people you know and love. There’s something reassuring about eating homemade food when you’re so far away from home.

Many campers brought their camping stove along just so they could boil water. It’s a shame considering how many different types of delicious outdoor cooking they are missing out on. You’re camping, not backpacking; since you don’t have to be exceedingly weight-conscious while camping, it would be a huge waste not to use that to your advantage.

When’s your next camping trip? Will you be trying any one of the recipes we’ve listed for you above? Or do you have a completely different meal plan in mind? If you have devised other creative ways through which your camping stove can be put to good use, please share them with us in the comments section below!