We always make sure to bring plenty of water bottles with us when we venture out into the great sand dunes. It’s all well and good if you stay safely near your van or your traveling group over the duration of the trip, but what if you were to get separated and lost? We wouldn’t wish this upon our worst enemies, but there’s no denying that strange things happen out there in the desert. If ever the fata morgana should ditch you alone in the unknown, knowing how to find water in the desert could very well end up being your only lifeline.

Death by dehydration is not a pretty thing. Not that any death is pretty, mind you, but this one is particularly gruesome. Your organs will fail one by one because there’s no longer enough water to keep everything in working order. Your kidneys are likely the first ones to go. Worst of all, even though you’re half-delirious from the heat and the thirst, there won’t be any merciful loss of consciousness until the very last moments.

Knowing how to find water in the desert could help prevent all that. While you still have some water left in your bottle and your body, don’t just sit around waiting for help because the desert is huge and it might take more than a week—which is approximately how long you can survive without water—for the rescuers to arrive. Instead, go look for more; the desert can be unforgiving, but it can also be rewarding if you’re resilient and resourceful. 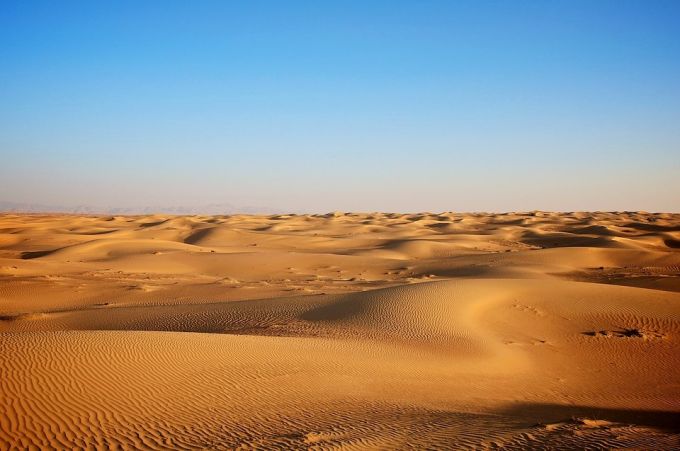 In this article, you’ll find plenty of useful information on where you are likely to stumble upon water in the desert. We will also explain how to access those water sources properly so you wouldn’t end up giving yourself diarrhea and dehydrate that much faster. Also, movies and other pop culture media have touched upon this topic over the years, and they have given birth to myths that could end up killing you if applied in real life. Thus, this article also strives to dispel those myths and leave you with nothing but a cold splash of refreshing truth in the face.

Water Sources in the Desert and How to Access Them

Contrary to popular belief, the oasis isn’t the only source of water you can find in the desert. It’s the biggest, yes—and if you could find one, you’ll probably be set until help arrives—but don’t despair even if that oasis you saw was nothing more than a mirage. The desert isn’t as hopeless a place as it first seemed to be if you had bothered to get to know it better.

The desert does see its fair share of rain, but if you were trapped among the sand dunes, even if it were to rain, all you could do was put out all the container you have on your person to hopefully catch a meager amount of rainwater to quench your thirst temporarily. 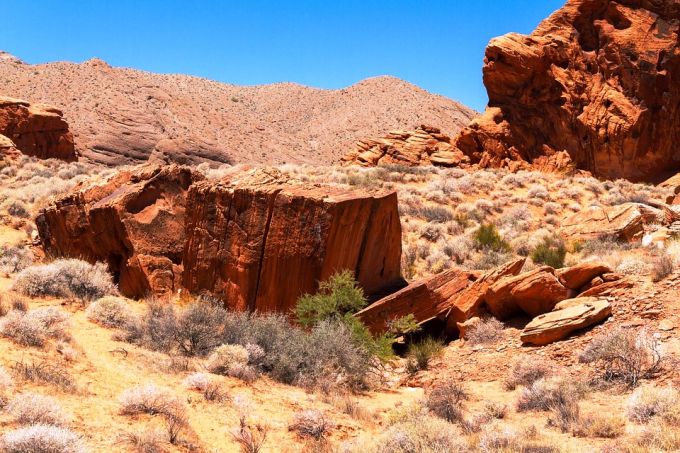 That’s because the sand soaks up rainwater like a sponge, and once the rain is over, there will be nothing left for you to collect—even if you were willing to mop the floor with a dirty rag and then squeeze what little moisture you’ve managed to pick up right down your parched throat.

However, what if there’s a natural container? One that’s large enough and has been sitting out there long enough to create a natural reserve. Unlike sand, rock pockets or even minor crevices in a rocky surface don’t soak the water in—rather, they contain it. 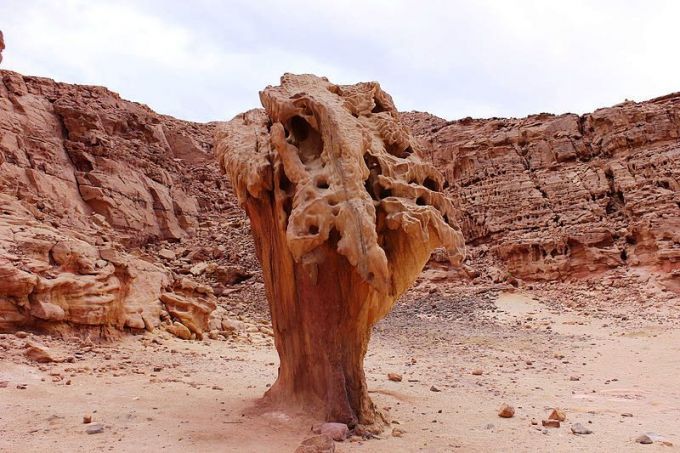 As we all know, trees cannot survive without water. Therefore, when you think about it the other way, where there is a tree, there will be water. You may have to dig in deep down to the roots to get to the water, but it will be worth it in the end. 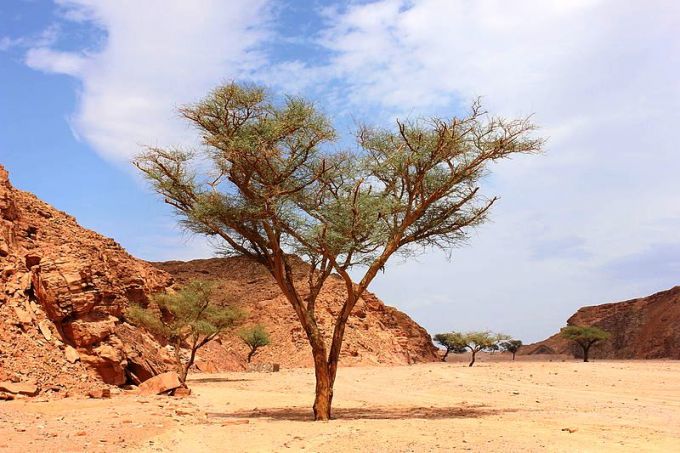 Now you might be wondering—does cactus count as a broad-leafed tree? The answer is, no. Yes, they look fat and juicy, and you’ve probably seen people drink directly from them in the movies. But guess what? This is another one of those cases where life doesn’t imitate art.

The majority of cactus plants are toxic. They are rich in alkalis—which, if ingested, would cause you to get sick. It might not outright kill you, but by the time your body finishes purging it out of your system, you could very well be so weak that you could do nothing but lie there and waste away next to your killer.

Of course, just like not all spiders are poisonous, not all cactus is indigestible either. But the odds are against you. Out of the five different varieties of the barrel cactus, only the fishhook barrel is safe for you to drink from. If you’re not a botanist, we advise against taking that bet. 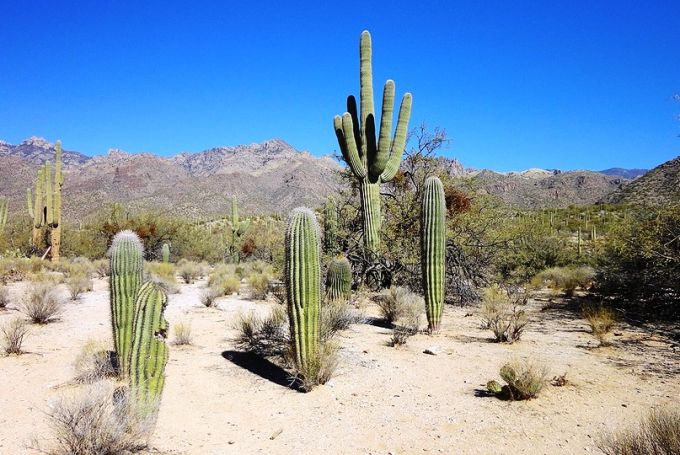 So what does count as broad-leafed trees? If you’ve found yourself in the lowlands, try to reach a better vantage point and see if you could spot any of these trees:

These trees usually grow in large groups, and since they are a lush, verdant green that contrasts greatly with the dull yellow of the desert, if there is a grove of them nearby, you won’t miss it.

Now, let’s backtrack to the subject of cactus plants for a bit. If worse comes to worst and there’s no other plant around except for the prickly prince of deception standing innocently beside you, calling out to you with its sickly-sweet temptation, then you might as well give in. But don’t lop parts of it off and drink the water. Rather, your aim would be the not-so-forbidden fruits. 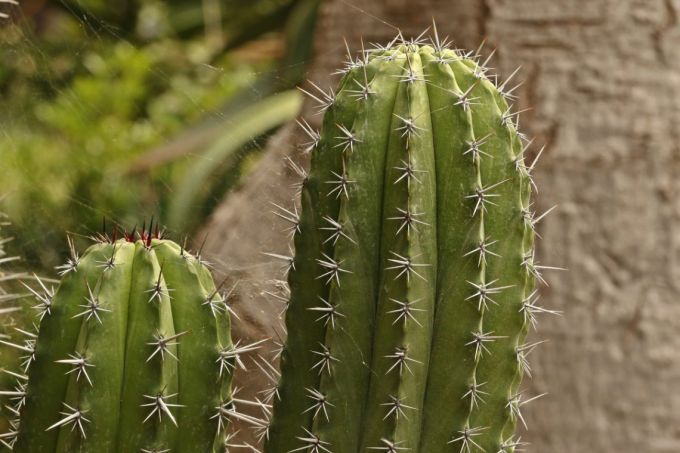 Cactus fruits like the prickly pear aren’t poisonous. You can eat them safely—although it would be better if you could roast or back them first to get rid of the thorns. Still, this is just a temporary solution. Cactus fruits don’t contain enough water to help you survive for long, which is why once you’ve quenched your immediate thirst and hunger, you’ll want to keep going in search of better sources of water.

While the desert isn’t exactly the ideal breeding ground for wildlife and you would not find any prancing ponies or dancing doe anytime soon, the desert does support its fair share of birds, lizards, and plenty of other animals. Like you, they need water to survive. 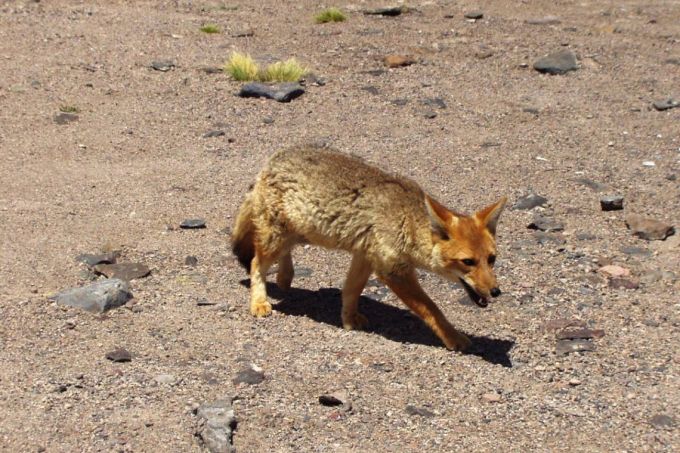 So what do we do when in Rome? We do as the Romans do. These native inhabitants of the Sahara know where all the best watering holes in town are.  Follow their lead.

There are some complex geographical calculations as to why canyons that face the north are less exposed to sunlight compared to canyons that face the south, but that’s neither here nor there. The point is, if you have a compass with you—which you should; no self-respecting outdoorsman would ever leave home without a compass—try to spot these canyons and head there. Chances are, you’ll find your lifesaving water source around that area. 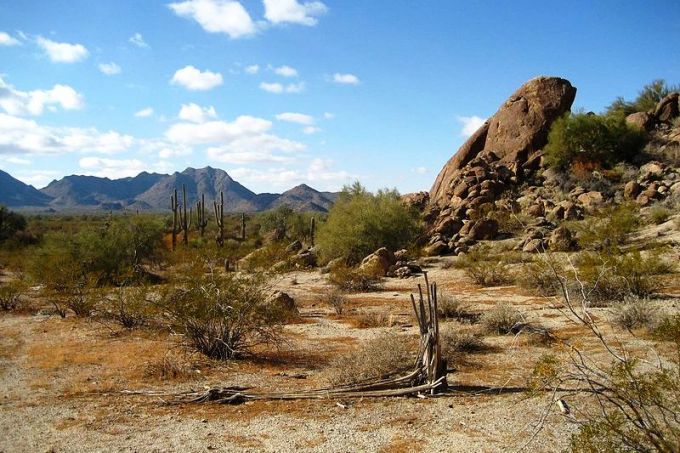 Remember what we said when we explained how to find desert animals’ watering holes? Even if you’ve managed to land yourself a hit, don’t be too hasty in your excitement to drink water. The water pockets you’d usually find around the north-facing canyons come from rainwater and snowmelts, sure, but even though the water was pure initially, it wasn’t born yesterday. Constant exposure to the elements has most likely contaminated it.

This is where you’ll be tempted to pat yourself on the back once again if you’ve remembered to bring a water filtration system with you, but even if you haven’t, you can still purify it the old-fashioned way. 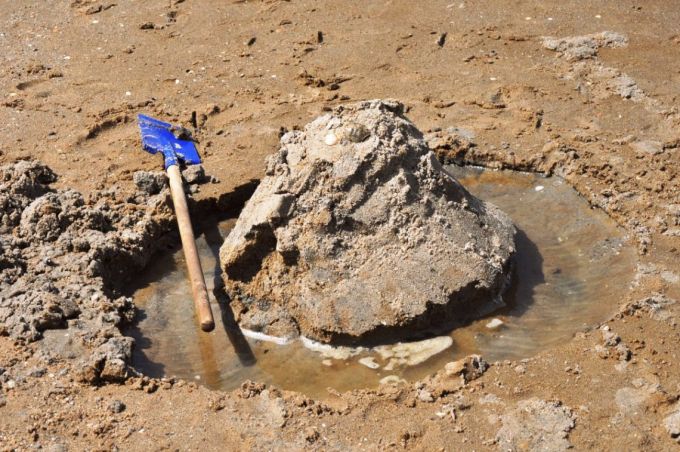 If you don’t see any natural containers of water around, but you spot damp spots on the sandy ground, then you’re in luck. Just dig it up and watch as it fills up with lifesaving water. The water you just dug up is probably even cleaner than the water you find in reserves since it’s not stagnant and it has been filtered naturally by the rocks and sand.

If you’ve done everything you could and that cloud with the silver lining is still nowhere near the horizon, you might have to resort to the extremes to survive.

As we’ve mentioned previously, a human could survive without water for a week. But your organs will fail much sooner than that, and your brain will start feeding you hallucinations that may render you incapable of walking in a straight line. 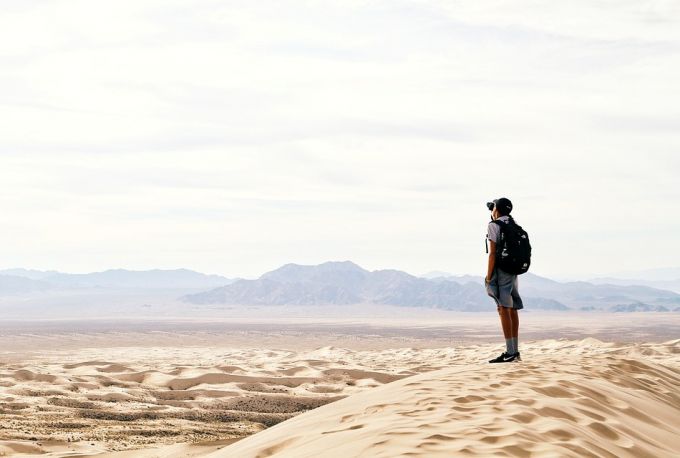 Before you’re incapacitated, try one of these life-prolonging methods.

Find a cool shade you can sit and wait in as you watch the food you’ve placed on the ground closely. Pray that an animal would come along and snatch it, so you could then follow it. That animal will have to drink sooner or later. Keep tailing it, and it will eventually lead you to its water source. 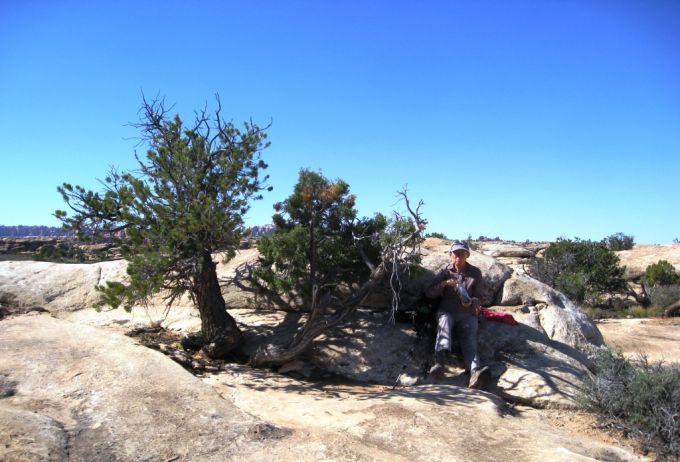 And before you ask, no, killing it to drink its blood is not a viable solution. While your overpowering thirst might have made you understand just what a vampire’s famous blood-frenzy is all about, just like urine, it’ll only serve to make you even thirstier.

These actions may be drastic, and they are definitely no long-term solutions, but they could help you survive to fight another day.

We all know how scarce drinkable water is in the desert, but that doesn’t mean there’s absolutely nothing for you to survive on out there. Don’t give up hope; keep looing. You should not just give up and lie in wait for the rescue team to arrive. Or maybe, you should try just that. Not the giving up on hope part, but the lying in wait part. 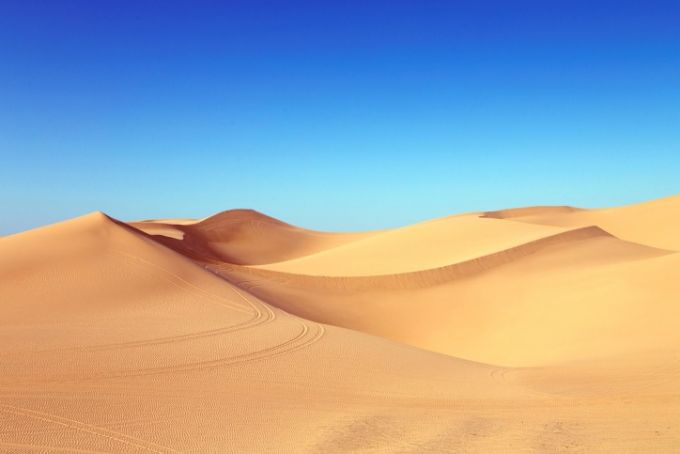 If you’re sure that help is coming in less than a week, what’s important is not to find a new source of water. Rather, it’s to conserve the water you already have within you. Going on a wild goose chase for a reservoir might bear fruit, or it might not.

Instead of expending energy on something that would just drain you faster, find a cool shade, limit your body’s direct contact with the hot sand, and cover up to protect yourself from the harsh wind. If rain clouds just happen to roll over, your chances of surviving this just doubled. 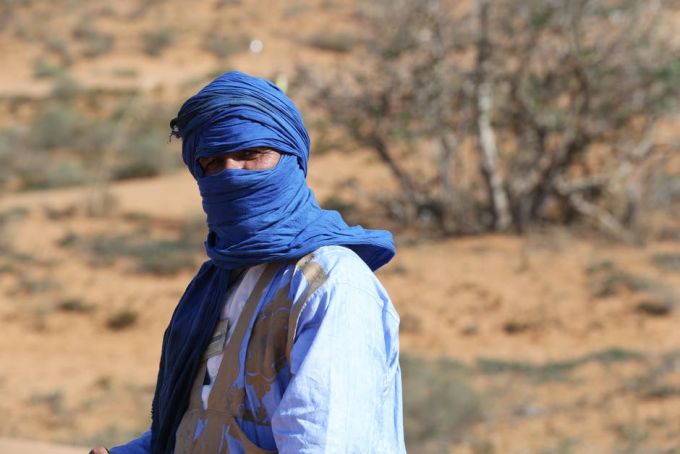 Last but not least, before every trip to the desert, be sure to bring a water filtration system, a compass, and a map with you. If you have a map that shows you where the nearest settlement or lake is, then all bets are off. We pray that you’ll never need to make use of any of the survival methods you’ve just learned.

Have you ever been stranded in a desert? Did you manage to find a source of water or did you choose to lie in wait for the search party to arrive? If you have any thoughts or opinions on any lifesaving methods that we failed to mention in this article, please share them in the comments section. We look forward to hearing from you.

Mark Foster loves to push his limits when it comes to survival in the wilderness. He might go for a 30-days adventure without any food or equipment except for a survival kit and a knife. We should mention that his survival kit has 122 items in it, so he know what he is doing. Mark is working on his book to share with the world all his experience gained during those brave adventures.