In the wild, where anything could happen, it’s important to increase not only the number of survival tools you prepare but also to sharpen your inherent survival skills. One of the most important skills to master that could very well end up being your saving grace revolves around fire building techniques that let you start a blaze without the aid of any modern tools.

While we do hope that you’ll never need to resort to this, there’s no telling when you might accidentally get your box of matches wet or when your fire starter might malfunction. Spending one night in the wild without fire might not seem like such a big deal—especially when you still have your camping tent, flashlight, and food supplies with you—but what if you have to spend more than one night alone in the dark?

What if you’re in a dangerous area heavily infested with wild animals? What if the temperature drops suddenly and your jacket is no longer enough to keep you warm? You won’t go wrong with adding fire building techniques to your arsenal, but you might end up regretting it if you don’t learn the primitive ways for building a fire while the information is still readily available.

In this article, you will learn different ways to build a fire without the help of convenient modern tools such as matches or a fire starter kit. We’ve separated this article into two major sections. We will first explain how to start a fire using the focal point produced by magnifying lenses, then how to achieve the same goal using much more primitive methods, if worse comes to worst.

How to Start a Fire in the Wild

If you have a match, all you have to do is strike it and let it ignite a pile of twigs treated with alcohol. If you have a magnesium flint, starting a fire is another simple business that only involves creating a spark that would spread to the pile of tinder you’ve previously prepared. If you don’t have any of the above, fire starting might not be as simple of an affair, but it’s not impossible either. 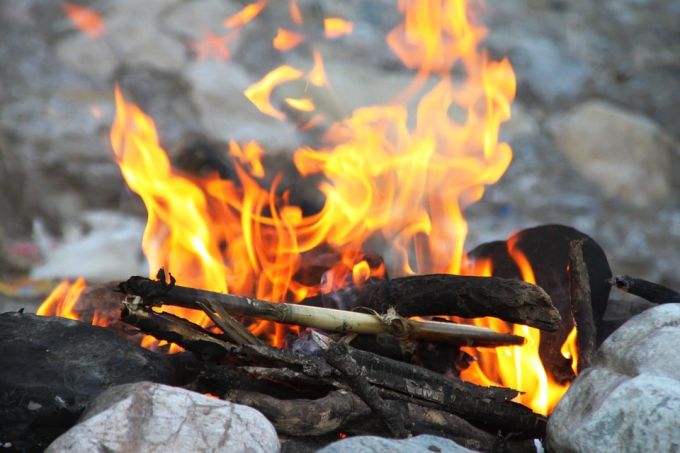 Without further ado, here are several techniques you can employ to start a fire in the wild alone, without the help of any of the tools we’re all used to relying on:

Method #1: Use a Magnifying Lens

When we said we were going to teach you how to build a fire the primitive way, was the first thing that came to your mind related to the good old-fashioned hand-drilling using a spindle and a fire board?

We’ve all seen it in the movies—how they made a thin, wooden stick stand up vertically on a thicker wooden board and start spinning like there’s no tomorrow. They made it look so simple, but that’s actually the hardest way to start a fire without the help of a match.

Not only will it drain your stamina rapidly, but it’s also a very fickle technique. Not just any plain old wood will do. Walnut, cypress, cedar, willow, aspen, and juniper wood make the best fire starters, but none of these woods may be readily available where you are, and that’s assuming you can even tell them apart properly, which could be very hard to do on the best of days, let alone when you’re stuck between a rock and a hard place.

Also, the wood has to be completely dry, or else it won’t work. With how often it rains in the mountains, finding two bone-dry wooden pieces of just the right size isn’t a walk in the park.

That’s why we’d like to save this method as a last resort. Rather, we’d like to suggest that you bring a magnifying lens with you whenever you venture outdoors to a place where it’s likely that your box of matches or your flint will get wet and be rendered useless—such as when you’re river-trekking. A little water won’t harm your magnifying lens, and starting a fire with it is a quick and simple affair if you know what you’re doing.

We will list out the supplies that you need to prepare to try this method out:

Once you’ve got the tinder nest ready, take the lens and start following these simple steps:

Simple, isn’t it? It wouldn’t even take ten minutes to get a good flame going.

If you don’t have a magnifying lens, binoculars, or even eyeglasses with you, you can still employ the same method using other, less-than-conventional tools:

You should be able to start a blazing fire with ease using any of the above methods in minutes or perhaps even seconds. The problem is, those methods only work when the sun is out. What happens when the need to build a fire strikes in the dead of night? You’ll have to resort to other methods—namely the hand-drilling and other primitive methods that we mentioned briefly above.

Difficult as they may be, they are not impossible to execute in the wild. In fact, those techniques have saved the lives of countless people since they were first invented thousands of years ago.

Method #2: Use Your Elbow Grease

The real challenging part starts now. Take a deep breath and crack your knuckles. Make sure you’re ready to go at it for a good while because you can’t stop halfway or else all your hard work will be undone.

If you succeeded, congratulations! You’ve just retracted the steps of our ancestors to the proud moment when mankind first learned how to harness the element of fire. If that method didn’t work for you, don’t worry. 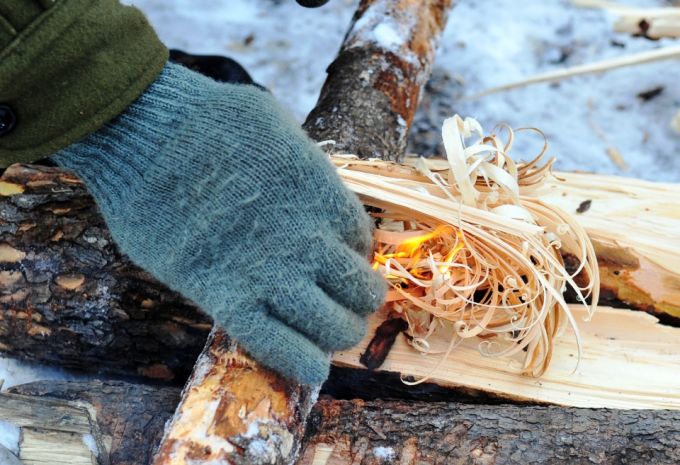 As long as you’ve got some elbow grease you can spare, and you aren’t inclined to give up too soon, there are plenty other ways to start a fire with the simple tools readily available in nature:

We suggest that you try your hands at the above methods—especially the high-difficulty friction-based ones—well before you find yourself in an emergency situation with no matches or magnesium flints at hand.

While it’s not impossible for beginners to get the hang of them in a day, in actuality, chances are it’ll take more than a few tries before you get it right.  If you’ve had practice, you’ll be able to handle the situation with confidence, and that’s very important in case you ever find yourself trapped in a critical situation.

We’ve included all the methods we think will come in handy for you in a real-life emergency situation. There are other methods to start a fire without the use of matches and flint stones—such as by rubbing a 9-volt battery onto a bundle of steel wool. Since we’re sure not many people will be inclined to carry steel wool on their person while they are hiking, we skipped that method in favor of those that make use of things you actually have a chance of finding and collecting in the wild.

No matter which fire building technique you think you’ll end up employing, we suggest that you spend some time practicing them firsthand. You don’t want to be caught up a creek without a paddle or without knowing how to paddle.

No matter how many tries it takes, don’t give up on mastering these techniques. Although, at the same time we pray that you’ll never need to make use of them. Carry extra matches or magnesium fire starters with you and put them in an airtight, waterproof container to be safe.

Which fire building technique do you think will come in handy for you if you ever need to employ them outdoors? Have you tried them out? How did it go? If you know of any other effective fire building techniques that we didn’t mention in this article, please share your experience and knowledge with us in the comments section below.